The facts about where BC’s energy comes from

Many people don’t give a lot of thought to the energy that runs our province, but there’s more to energy in BC than hydro.

In BC, energy is all around us: It powers our computers, heats our showers and fuels our vehicles. But most people probably don’t give a lot of thought to where that energy comes from.

And if they do, BC’s famous hydro dams probably come to mind first. But there’s much more to energy than electricity, and hydro power is just one piece of BC’s energy pie.

In 2018, hydroelectricity delivered 18 per cent of the energy BC needs – or about one-and-a-half slices on an eight-slice pizza pie. Nowhere near enough to feed a growing province.

So where does the rest of BC’s energy come from? Let’s take a closer look at the four main sources. 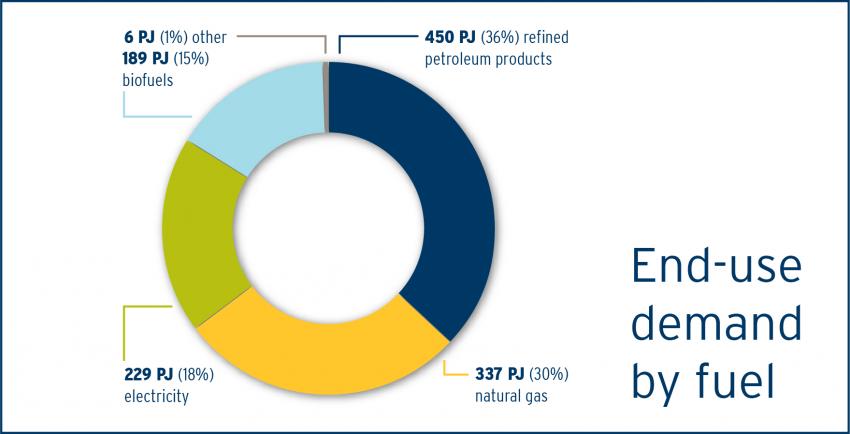 In a province famous for its forests, wood waste has become a major source of energy. Most of Canada’s biofuel energy is made in BC and, in 2018, it delivered about 16 per cent of BC’s energy needs. Most of the province’s biofuels are from biomass also known as wood waste, which is burned in a boiler to create steam. This steam then powers a turbine to generate electricity and heats water that flows through a series of pipes to keep buildings warm.

With a steady supply of wood, BC aimed to grow wood waste into a larger piece of the energy pie. A decade ago, the government unveiled the BC Bioenergy Strategy, which invested $15 million in 17 projects.

But the supply of wood waste may shrink in the future, which could limit the future of biomass energy. A report prepared for BC Hydro forecasts that wood waste supply will fall over the next 10 years as the forest industry is allowed to cut less wood.

FortisBC sees tremendous potential for biofuels in its natural gas system. By capturing the methane generated by landfills and farming operations, this Renewable Natural Gas (RNG) can heat BC homes and businesses. FortisBC was the first utility in North America to offer this kind of RNG program to its customers, and now more than 9,500 customers have signed up.

The company intends to expand its offering in the coming years so that this low-carbon fuel makes up an increasing share of the natural gas supply in BC. With operations at a few farms and landfills around BC, FortisBC recently worked with the City of Surrey on a biofuel facility that will see curbside waste turned into fuel for its vehicle fleet. 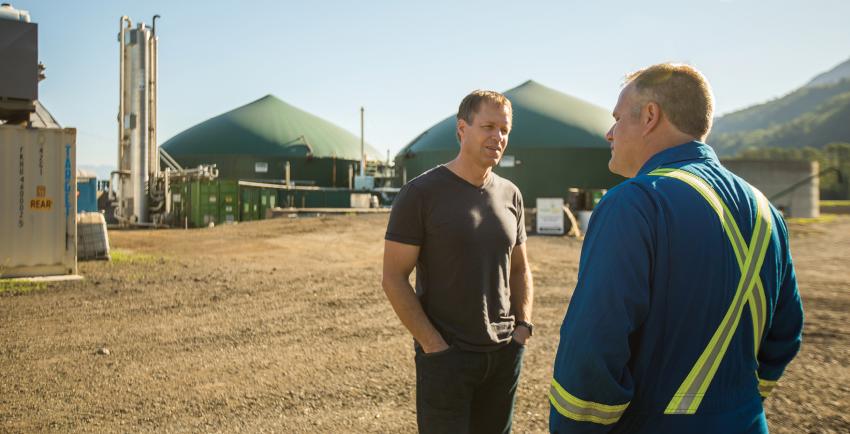 Hydro power is the world’s most common type of renewable energy and meets a large share of BC’s needs. Since the first dam at Buntzen Lake began supplying electricity to Metro Vancouver more than 100 years ago, as of 2018, hydro power met about 17 per cent of BC’s energy needs – slightly more than biofuels.

A typical hydroelectric plant makes electricity by harnessing the energy created by the force of falling water. This is done by building a dam across a river to trap water in a reservoir. A controlled flow of water pushes through a spinning turbine, which generates electricity that can be stored and used in homes and businesses all over the province.

BC generates more hydro power than every other province except Quebec. Even with this overflowing supply British Columbians are consuming less and less electricity, about 23 per cent less electricity per capita than the national average in 2018.

The future looks bright for electricity as more industries and transportation companies look to make the switch from higher carbon fuels. As the transition accelerates, British Columbians will continue to rely on an abundance of hydroelectric power.

Although known across the province as a natural gas company, there’s much more to FortisBC than just gas. The company also serves more than 136,000 electricity customers in BC’s southern Interior, mostly with hydroelectric power. It owns four hydroelectric plants, including the Upper Bonnington generating station in the West Kootenay, which was recently inducted in the Hydro Hall of Fame for being in operation for more than 100 years.

Natural gas was first discovered in BC by a railway company on the banks of the Fraser River, in Haney, more than a century ago. But it wasn’t until the 1950s that the province began to develop its own wells and built the Westcoast Pipeline that runs from northeast BC to the U.S. border.

Since then, natural gas use has grown and now supplies about 30 per cent of the energy consumed in BC, especially on the coldest days of the year.

Natural gas is made up mostly of methane and is formed from organic material that has been transformed into gas over millions of years. The gas is pulled from the ground through wells that pump it to a nearby facility where it is refined and delivered to customers through pipelines that can run for hundreds of kilometres.

An alternative transportation method is to cool natural gas to -162C, which shrinks and transforms it into liquefied natural gas (LNG) that can be moved by truck or by ship to destinations all over the world.

Natural gas is a versatile fuel, which is part of why its popularity is growing. It can be used for heating, electricity and as a transportation fuel. As of 2018, residential and commercial uses accounted for about 18 per cent and 14 per cent of natural gas use in BC respectively, mainly for home heating. More than 60 per cent of the rest was consumed by industry. About five per cent of the province’s electricity needs were served by gas.

Although it’s not the main source of energy in BC today, it’s expected to take the top spot over the longer term as more industries and heavy vehicles make the switch to natural gas from diesel or oil.

With more than 1 million customers, FortisBC is the largest natural gas provider in the province. It’s also the single largest energy provider in the province serving up to 50 per cent of BC’s energy needs on the coldest days of the year. In addition to thousands of kilometres of gas lines it also operates two LNG facilities on the Canadian West Coast in BC: Mt. Hayes near Ladysmith and Tilbury in Delta.

These facilities are central to the company’s natural gas for transportation program, which has displaced more than 145 million litres of diesel since 2010. 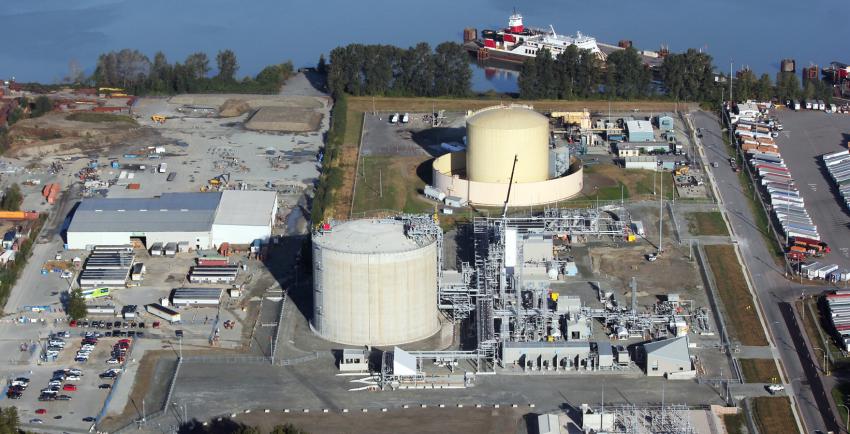 Even with the widespread use of renewables and natural gas, the reality is that refined petroleum products, like gasoline and diesel, are the single biggest sources of energy accounting for 37 per cent of the energy consumed in the province, according to the National Energy Board’s most recent data in 2015. Nationally, BC is the fourth largest market for refined petroleum consuming about 35 per cent less than the next largest market, Alberta.

BC has had a long love affair with petroleum and was home to Canada’s first gasoline station at the corner of Cambie and Smythe in downtown Vancouver. Fast forward to today and motor gasoline accounts for nearly half of the refined petroleum products used in BC, while diesel makes up another third of that total.

However, refined petroleum’s long stay at the top appears to be in jeopardy. There is increasing pressure in BC and around the world to adopt policies aimed at reducing greenhouse gas emissions. Gasoline sales are down in BC in 2016, the most recent year available, and it’s possible that this is part of a long-term trend. In the National Energy Board’s 2017 forecast, refined petroleum is set to fall behind natural gas as the leading energy source in BC in the next 20 years.

In addition to a more challenging policy environment, refined petroleum is facing challengers in the transportation market like electricity and natural gas. Although both still lag behind, technological advances could see an accelerating adoption of electric personal vehicles and more heavy- and light-duty vehicles switching to natural gas.

BC’s energy mix could be in for a big change. The province is expected to continue to grow, meaning its appetite for energy will grow, too.

To meet this demand there’s a growing push for more renewable sources of energy like wind, solar and geothermal. Wind generation has grown quickly in BC and less than a decade since the first wind farm was installed already serves about two per cent of BC’s electricity needs. Geothermal has also made inroads as a heating source for multi-unit buildings. Solar has been slower to develop, at least in BC.

FortisBC is also looking to the future of energy. It is investing in low-carbon Renewable Natural Gas and has committed to growing it to five per cent of its gas load by 2025. It is aiming to provide solar power to BC’s energy grid by partnering with the Upper Nicola Band on a proposal to build a facility near Merritt.

Fortis Alternative Energy Services has been supplying new developments with geothermal energy. Some customers include the Telus Gardens building in downtown Vancouver and the Marine Gateway project in south Vancouver.