Investment in Cranbrook Community Forest pays off for entire community

Giving back to local communities where we live and work is important to us. That’s why, when pre-construction activities for the Inland Gas Upgrades (IGU) project began in 2020, Blair Weston, community and Indigenous relations manager with FortisBC, began to look for ways to support the Cranbrook community. The first thing Blair did was go for a walk in the Cranbrook Community Forest (CCF). Since work on the IGU project was starting partially within the forest, he thought that would be a good place to start.

Blair is a Kootenay resident and avid mountain biker, already very familiar with the CCF trails. On his walk, he saw how busy all of the trails were—especially one trail in particular. “The trail that runs along our gas line right of way is flat and straight. We gave permission for it to be built as part of the multi-use forest trail network,” says Blair. “I saw that it was being used by hikers and mountain bikers of all ages. I even saw people pushing baby strollers. I realized this was the kind of trail we needed more of, because it could be enjoyed by the whole community.

Blair contacted the Cranbrook Community Forest Society (CCFS), a non-profit society run by a group of dedicated volunteers. The society volunteers raise funds and donate their time to maintain the forest trails, with the help of the Wildhorse Cycling Club, and manage trail projects approved by Recreation Sites and Trails BC.

CCFS board member Jim Nicol says hearing from Blair was timely because the society was already looking into building an additional easy trail due to the popularity of the existing ones. “Our Pilsit trail is well used by young families with kids or anyone looking for an easier bike ride,” says Jim. “The week after we built it, we thought we should have taken it a step further and added an ‘adaptive’ component to the trail. Our plans for the new trail included that.”

Adaptive trails are designed to be suitable for those who can’t ride a typical two-wheeled bicycle whether it be due to mobility, vision or cognitive limitations. “Adaptive trails are slightly wider to accommodate three- or four-wheeled bikes, with turns that aren’t quite as tight and fewer obstacles,” Jim explains. “The trails still have a natural surface and bumps so it’s a fun trail for riders of all abilities.”

The CCFS completed its Padawan Green Flow Adaptive Trail in June 2021. The five-kilometre loop runs through meadows and forest, culminating in views of the snow-capped peaks of the Rockies. It also has connections to other trails and multiple access points. The society plans to build an additional eight kilometres of this trail at a later date.

FortisBC provided $5,000 as seed money to help the CCFS get the Padawan project going. “This was a huge undertaking that required a significant amount of fundraising, including applying for large grants,” says Jim. “Some large foundations won’t take you seriously unless you already have, as they say, ‘skin in the game’—in other words, money you’re prepared to invest in the project. We needed to gather donations from supporters before we could even think about applying for grants. FortisBC’s $5,000 donation was the first. It got the ball rolling.”

FortisBC also provided the CCFS with an additional $5,000 donation to help with a trail maintenance program. “We have a lot of volunteers who are willing to do things, but there are more than 100 kilometres of trails. Plus, the province now requires us to do an annual trail inspection. It’s a lot to ask of our volunteers,” says Jim. “FortisBC’s donation allowed us to hire two people to do a trail inventory. We’re calling this our ‘FortisBC Trail Maintenance Pilot’. The information we gather during the pilot will help us plan ahead and raise the necessary funds to hire people to do the work.”

Supporting the College of the Rockies annual fundraiser 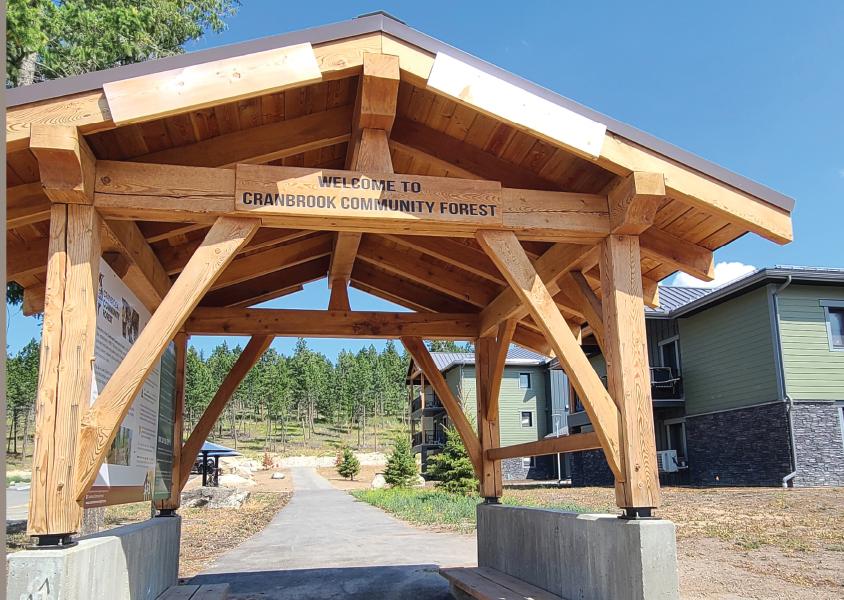 While Blair was conducting his research into community investment opportunities in Cranbrook, College of the Rockies had recently launched a new initiative as part of its annual Giving Tuesday fundraising campaign. The campaign goal was to raise funds for a trail enhancement project on college land—which is directly adjacent to, and an extension of, the CCF.

Graham Knipfel, director of donor and alumni engagement for the college, sent a donation request to FortisBC. “When I read the college’s proposal I couldn’t believe it,” exclaims Blair. “Part of their proposed project was to create a starting point, or staging area, for trail users to enter the CCF. Their project intersected with the project we had just funded for the CCFS.”
Graham explains their idea to create a designated college trailhead, and revitalize surrounding multi-use trails on college land, came about after construction of new student housing was complete. “Prior to construction, the college parking lot was used by trail users to meet up and head out onto the trails. This was impacted during construction of the student housing complex,” he says. “Once the project was complete, we wanted to re-establish the parking lot as an access point to the forest and create an improved user experience for the community.”

The new designated college trailhead will have improved signage and a bike wash station. The college also plans to build a rejuvenated multi-use up-track trail with benches and a mountain bike flow trail with berms, technical features and ride-around options. They also plan to add native plants with interpretive signage.

“A project of this scope wouldn’t be possible without the generosity of community donors like FortisBC,” Graham notes. “It’s fortuitous that FortisBC was looking into community investment opportunities in the Cranbrook area. Its $10,000 donation helped put us over the top of our fundraising goal.”

Blair is thrilled that the IGU project created an opportunity for FortisBC to provide a total of $20,000 in funding for two separate groups with a common goal. “This truly is a community forest. It’s well used by people from two to 92. These groups are helping to make the CCF trail network more accessible to everyone.”