When a train travelling near Cranbrook hit a golden eagle, one of its crew members sprang into action to retrieve it. Certain the bird had died, he wanted to treat it with respect by giving its feathers to a First Nations community.

Instead, when he discovered the bird was still alive, the train’s crew quickly made arrangements to have it flown to the OWL (Orphaned Wildlife) Rehabilitation Centre in Delta. The crew’s quick action and the treatment it received at OWL saved its life.

OWL is a non-profit organization whose staff and volunteers are dedicated to public education and the rehabilitation and release of injured and orphaned raptors—also known as birds of prey—including eagles, hawks, owls, falcons, vultures and osprey.

The golden eagle that arrived from Cranbrook is one of OWL’s many success stories, says Rob Hope, raptor care manager at OWL. “After nine months of treatment, including wing wraps and extensive rehabilitation to help heal its broken shoulder, it was released back into the wild.”

Of the 650 to 700 birds of prey that come through its door every year, OWL is able to successfully rehabilitate and release more than 50 per cent back into the wild. Others may be kept at the centre permanently as surrogate mothers to younger birds, or to help with public outreach and education programs in schools.

One long-time OWL resident, a male bald eagle named Sonsie (a Scottish word meaning handsome or cheeky), has become an “education ambassador” for the centre, so comfortable in the role, he makes regular television appearances.

“We’ve had Sonsie since 2002 when he was a chick,” Rob explains. “He’s so comfortable around humans, he’s become an integral part of educating the public about bald eagles at festivals and events, and any time we have the opportunity to talk to the media about our work.”

Recognizing community organizations where we live and work

Giving back to communities where we live and work is important to FortisBC. A big part of that is finding ways to highlight the great work that local organizations do within those communities.

FortisBC had an opportunity to recognize OWL at the 2018 Union of BC Municipalities Conference (UBCM) in Whistler when it was nominated by the City of Delta for the FortisBC-sponsored UBCM Community Giving contribution. OWL was one of three recipients selected to receive funding through our Community Investment Program to help further their work.

OWL decided to use the funding they received for a very special project.

Approximately 90 per cent of the birds OWL receives have injuries that are due to human factors such as power lines, windows and cars.  “It may surprise most people to know that one of the biggest risks to raptors, especially bald eagles and hawks, is lead poisoning,” says Rob. “The funding we received from FortisBC meant a lot to us. We were able to purchase additional lead poisoning test kits, and it’s helping to save lives.”

Rob describes raptors as opportunistic, often scavenging leftover meat from “kills” after an animal has been shot by a hunter. “Unfortunately, when an animal’s been shot with a lead bullet it fragments. A bullet fragment the size of a grain of rice could kill an eagle,” he says.

The public is welcome to visit OWL for a guided tour and meet its permanent residents, including the very handsome, cheeky Sonsie, all year round. Learn more about OWL’s programs and ways you can help. 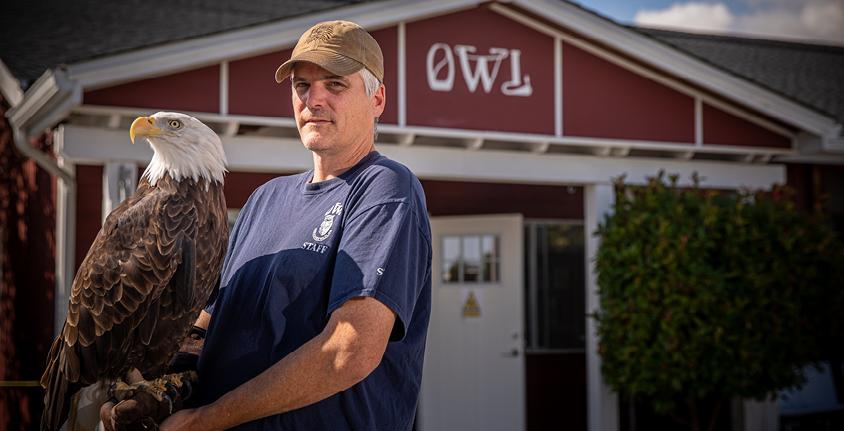 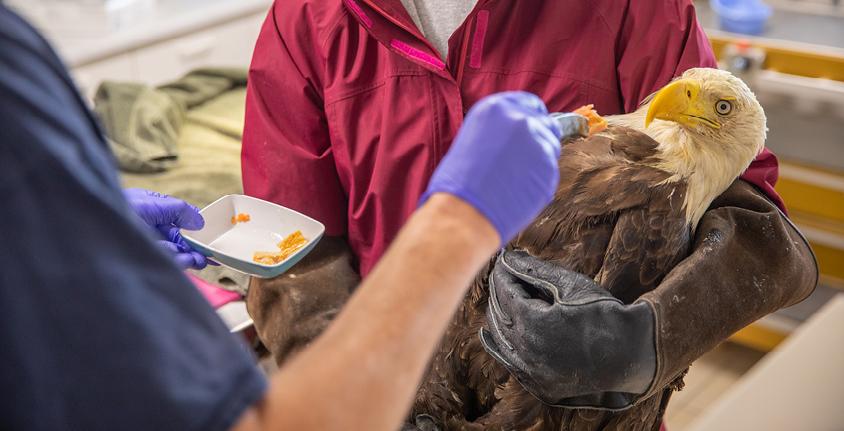