How we protect nesting ospreys in our service territory

Ospreys are a common site in most parts of BC from approximately mid-March to September when they return to the province to nest and fledge their young. They can be easily spotted keeping watch over their large stick nests perched high on trees or poles. Taking steps to protect ospreys living within our electric and gas service territory is a priority for us, but how we protect them differs depending on where the nest is located.

Do not disturb ospreys in residence

Ospreys prefer to nest on the highest structure in an area, which is why they often build their nests on top of power poles. FortisBC has a dedicated Osprey Nest Management Program—including building alternate, higher, nesting platforms—to address this issue and help keep ospreys, our customers and crews and our equipment safe.  This program is focused on the areas in Southern BC where our electricity infrastructure is located. The measures we take to protect ospreys that nest near our gas line infrastructure may be lesser known, but are equally important.

Caroline Astley, an environment manager with FortisBC, says osprey nests are protected year-round under the BC Wildlife Act.  “Our gas line project teams take every precaution to avoid creating the sort of noise disturbance that would cause these birds to be distressed,” says Caroline.

When we’re planning gas line upgrade or maintenance work, one of the first things we do is have an environmental consultant perform field surveys. This helps us locate ospreys and other wildlife that may be in the area, and make plans to protect them, long before any construction work begins. If we locate a nesting osprey, we establish a “buffer zone” around it, as long as the osprey and its chicks are in residence, to lessen the impact of construction.

Caroline explains how the osprey buffer zones work. “Professional biologists determine the buffer zone around a nest and what’s allowed to occur within it,” she says. “Osprey can react to both sound and visual distractions. There is no one-size-fits-all solution. It all depends on the location of the nest and the kind of work we’re doing. The goal is always to ensure the parents and chicks are happy and behaving normally.”

If a biologist decides that work near an osprey nest can safely proceed, a dedicated osprey monitor will be stationed nearby to keep a close watch on the nest. “Osprey monitors will literally babysit a nest to watch for subtle changes in behaviour,” says Caroline. “If the birds become agitated, we stop work immediately. We don’t want them to be disturbed for an extended period of time.”

Vanessa Bell, an environmental program lead with the Inland Gas Upgrades (IGU) project, has seen first-hand the challenges faced by project crews who need to work near nesting ospreys, and the measures the team takes to protect them. The IGU project is a multi-year project involving making upgrades to 29 sections of existing gas line in communities in the Northern Interior, Thompson-Okanagan, Columbia-Shuswap and Kootenay regions of BC. When planning was underway for gas line upgrade work in the Mackenzie area in 2021, the team discovered multiple ospreys nesting in the area.

“We were surprised by the density of nests along the temporary workspace corridor—there were six nests in a row,” says Vanessa. “There was an osprey nesting right above every place where work was planned.”  When biologists decided the work would cause too much of a disturbance for the birds, it was rescheduled. “Our contractors did their best to work in other areas, but most of the work was delayed for months until biologists determined the chicks were fully fledged and weren’t likely to return to the nest,” says Vanessa. “It’s hard to predict when the birds have left the nest for good. We always err on the side of caution. We want to be sure the birds won’t be coming back before we start work.”

Vanessa cites another example where gas line work was significantly delayed because of some nesting ospreys. “Ospreys prefer to nest close to permanent bodies of water for easy access to fishing,” notes Vanessa. “Some of the work we were supposed to do on a crossing of St. Mary’s River in Kimberley was postponed by an entire year, in part, because there was an osprey nest on either side of the river.”

Moving a nest is a last resort 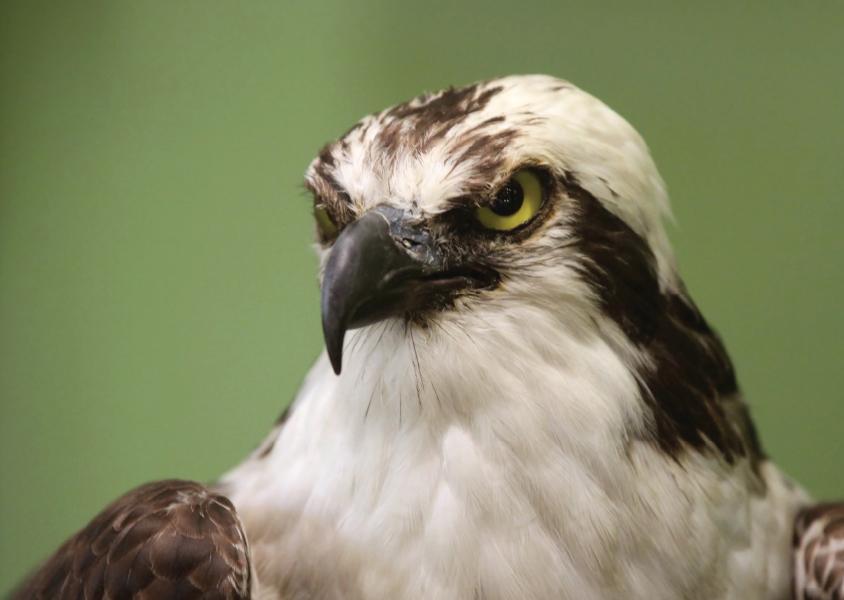 Moving an osprey nest to another location away from construction is another possible strategy, but it’s only used in extreme circumstances. “Permits can be obtained from the Ministry of Land, Water and Resource Stewardship to move a nest to another location, but this is only done in situations where the nest poses a danger or if there is no other choice,” says Caroline. “For example, we would want to move a nest if it was on top of a power pole, and could become a fire hazard. Moving a nest is always the last resort. We much prefer to change our work schedule and wait for the birds to leave the nest, or until they get old enough that we can work in the area.”

Caroline sums up her team’s positive outlook when it comes to nesting ospreys: “We made a lot of changes to our work schedule last year due to the number of nesting ospreys near our work sites. It was really challenging, but the entire team was open to it and understood why we were doing it. We know this is the right thing to do.”

Protecting diverse ecosystems at every stage of a project