Burnaby has an abundance of watercourses winding their way through the city, including more than 60 creeks, two lakes and a river. All that water, and the greenspace along its shores, is home to a variety of fish and wildlife. That’s why, when we began planning the route for the Pattullo Gas Line Replacement project, protecting these environmentally sensitive areas was top of mind.

The project includes building a new six-kilometre gas line in Burnaby to replace a line we have on the Pattullo Bridge before the bridge is decommissioned. Caroline Astley, FortisBC’s environment manager for major projects, talked to us about the design and route for the new line, and the steps we’ll take to prevent and minimize impact to the environment.

How was the route for the Pattullo Gas Line Replacement chosen? 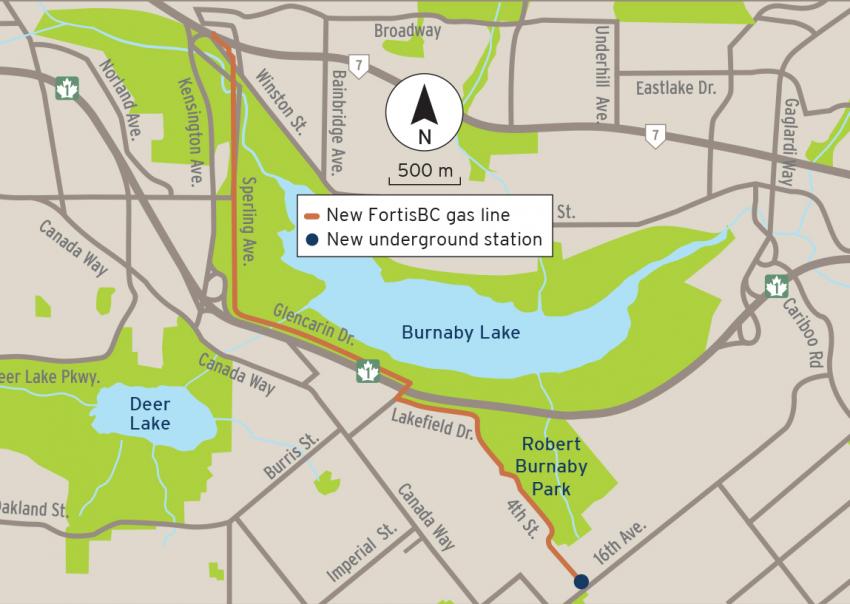 Before we build a new gas line, we assess a number of factors including how to best minimize potential community and environmental impacts. We complete a thorough assessment of an area to identify environmental and archaeological sensitivities that may require additional protection.

We selected our final route for the Pattullo Gas Line Replacement based on technical investigations, City of Burnaby input and feedback received during engagement. We worked closely with Indigenous groups and the local community when planning the route.

How is the route designed to help avoid impacts to the environment?

We’ve designed the route so that the gas line will be located mostly within existing paved surfaces and trails. Working within paved surfaces is an extremely environmentally friendly way to install a gas line because you’re working within previously disturbed areas. By staying out of greenspaces as much as we can, minimizing the size of our temporary workspaces and the number of water crossings we have to do, we’re reducing our impact as much as possible.

Some creek crossings will be necessary to complete the gas line. How will you protect fish species and their habitat within these creeks?

Although the project route will cross some watercourses, if our contractor needs to do any in-stream work, environmental monitors will go in first to remove wildlife such as amphibians and fish and relocate them before we start work.

Most creeks we need to cross along the route are already in culverts—closed channels or tunnels constructed to allow water to move from one area to another—so the gas line will be installed either above or below them. Depending how deep the creeks are, we won’t have to impact them at all.

Working with the Department of Fisheries and Oceans Canada

We’ve been talking to the Department of Fisheries and Oceans Canada as part of project planning and will be following its specific guidance and requirements for our project during construction throughout 2021/22.

We want to make sure we’re not introducing any sediment-laden water into local streams. Any water that leaves our worksites must meet strict water quality control measures. To do this, we use stringent erosion/sediment control measures including an onsite treatment and filtration system.

Part of the route the gas line will follow will be adjacent to Burnaby Lake Regional Park and Robert Burnaby Park. How will you protect the natural environment near the wetlands along the shores of Burnaby Lake?

A qualified environmental professional will identify and fence boundaries to protect sensitive ecosystems and wildlife habitats before we begin. Some vegetation clearing is unavoidable. In situations where clearing needs to occur in sensitive areas, such as within 10 metres of watercourses, wetlands and riparian setbacks, we’ll carefully clear the area by hand.

Although it’s possible at-risk plants such as Roell’s brotherella moss and Vancouver Island beggarticks could be near the part of our route that extends along Sperling Avenue, our environmental assessment has concluded there is only a small chance we’ll encounter them.

We’ll be staying out of greenspaces as much as possible and out of those habitats where they might occur, so it’s very unlikely that they will be impacted. We’ll also be doing our pre-construction work, such as vegetation clearing, in the fall and winter when plants are dormant, so that’s another good way to avoid them. Construction workers will be on the lookout for these plants. If they find any, or see anything unusual, they’ll bring it to the attention of the project team. We’ll work with a qualified environmental professional to implement a relocation plan.

Cattail marsh habitat has also been identified in two areas around Burnaby Lake close to where we’ll be working. We’ve included these habitats in our environmental management plans to protect them wherever they’re found.

Watercourse crossings and wetlands in general can be important archaeologically. Has this area been assessed for its archaeological potential?

We know this area has traditionally been used as a travel corridor. There is always potential to unearth archaeological artifacts. We have quite a robust archaeology program that involves doing an archaeological impact assessment to assess areas of high archaeological potential along the route and monitoring during excavation.

Our crews are educated about the kinds of artifacts they might find, to notice changes in the ground and what steps to follow if they see anything at all unusual. If they find something, the standard procedure is to stop work immediately and call a member of the team, so an archaeologist can be dispatched to assess the find.

What measures will be taken to protect birds and other wildlife?

Contractors are required to submit Environmental Protection Plans before they begin work. There is potential for wildlife to come into the work area, but our contractor is very aware of this kind of thing. If they spot something, they stop work and bring it to our attention. We’ll have fences around construction sites that will help to prevent wildlife from wandering in. Plus, construction is loud work involving lots of people and activity. Wildlife tends to stay away.

Working outside of bird nesting season

A variety of raptor and songbird species are known to live around Burnaby Lake. During the surveys we conducted in the area, we saw mallards, American coots, crows, great blue herons, northern flickers, belted kingfishers and hooded mergansers.

We won’t start construction activities until later in 2021, so we’ll be working outside of the bird nesting window. Bird nesting season occurs in the spring and summer from March to mid-August. Any vegetation clearing that needs to happen will take place outside of that. Our environmental experts will also go out and have a look for other protected nests, such as eagle nests, before clearing begins, and they will continue to monitor for nests during construction.

The Pacific water shrew is considered the most critically endangered of the at-risk wildlife species that have been identified as living in, or visiting, parkland along the route. The provincial government released salvaged Pacific water shrew into Robert Burnaby Park in 2010 during the Highway 1 expansion project, and it’s believed that they still live there.

Because we’re going to be working in and around their known habitat, our environmental experts conducted Environmental DNA (eDNA) testing to determine if they were present. The Pacific water shrew is a very sensitive species. The eDNA detection method was chosen because it’s a best practice within the industry. It’s a much less intrusive and less time-consuming method of assessing the presence of a species than trying to trap them.

Biologists placed tubes containing bait in areas likely to be frequented by shrews and left them for a period of time. At the bottom of each tube, they placed little mats, or pads. They then collected the pads and extracted DNA from the cells, urine or feces that the animals shed as they wandered through the tubes.

Pacific water shrews have a specific set of DNA markers that distinguish them from other shrews. If there is a positive match, that’s proof that a shrew has gone through that piece of tube at some point. No shrews were detected during the study conducted by our consultants. This gives us some comfort that they’re not likely using that particular habitat.

Our findings are also supported by data gathered during the environmental overview assessment that was completed for our project prior to the eDNA study. The data indicate this habitat is less than optimal for the shrew.

How will FortisBC restore the areas where we worked?

We have a restoration plan that will restore the areas where we worked to the same condition that they were in before, or better.

One of the ways we’ll improve the areas where we work is to remove some invasive species like Himalayan blackberries and Scotch broom during vegetation clearing. We’ll replant those areas where we can with native trees and shrubs. There will definitely be a focus on species of flowers and fruit that are good for wildlife.

We’ll also develop a maintenance program to treat noxious species, such as Japanese knotweed and Canada thistle, within our rights of way that will continue once our work is complete.

We’ll be working closely with the City of Burnaby and Metro Vancouver to include their specific restoration requirements where applicable. As part of our restoration plan, we’re partnering with the City of Burnaby to design and build a new cycling and walking path along the route to provide a lasting local benefit for the community.
We know how important these greenspaces are to residents of Burnaby and neighbouring municipalities. They provide a place to reconnect with the natural world without leaving the city. We want to make sure we’re minimizing our environmental footprint. Ideally, we want the results of our restoration to appear as though we were never there.

How we protect nesting ospreys in our service territory